Another month, another group of great records. After combing through and remembering what June had to offer, I think it pales in comparison to some of the other months we’ve seen so far. Obviously the Whitney and Mitski albums are great, but others have some nuance to them. You’ll see I’m not totally positive about all the albums on this list, some coming close to something of a negative review. I’m not one to do that. But thankfully, July has blessed us with some of my tippity-top favorites. Lovely. But for now, here’s what I loved the most in June 2016.

Deerhoof has always been one of those bands that I continuously want to get into more, but never make the time to do so. I’ve got a good idea of their overall sound, I think. When I get into Deerhoof, I’m there for the janky grooves, the parts that are meant to sound bad, but are so good at the same time. The Magic seems to be a lot more low-key and pop-centered compared to some of their other releases, with less of the wild moments I love. However the album definitely doesn’t start low-key with “The Devil and His Anarchic Surrealist Retinue” and “Kafie Mania,” an ecstatic blast that really hooks into you for the rest of the album. This boost of excitement holds for the most part, getting refreshers from great cuts like “Model Behavior,” “Learning To Apologize Effectively” and “Debut,” but for the most part coasts. That’s not at all a bad thing, since for the entirety of the album it’s very clear that it’s still the same lovable Deerhoof, which is all it needs, really. This album proves that I don’t actually have a good idea of what their true sound is and that I need to keep digging to find the answer. 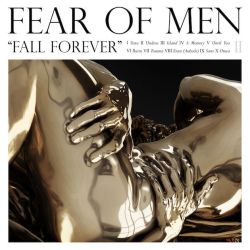 Although Fall Forever is by far my least favorite record from Fear Of Men (out of their debut and compilation of demos), I’m still hopelessly in love with it, because in my mind they can do no wrong. This collection of tracks finds the band leaning more towards a sleeker, more programmed sound, allowing for pinpoint-precise drum beats and a more synthetic basis for their instrumentals. The downside of this is obviously making the record sound like it was made by robots. A drum machine has more personality than some of the drumming on this record. Also, the jangly guitars I loved from previous FoM releases are also almost completely absent from the record, leaving the sterile synth backing alone to grow tiresome through the ten tracks. Okay, so I’ve basically just griped about this record for a while now, but there are great things about this, like lead singer Jess Weiss & the moooood. And this shift to a more synthetic base might lead to fruitful things down the road. Fear Of Men is just recommended all the time. Get into it.

Huerco S. – For Those Of You Who Have Never (And Also Those That Have) – Proibito 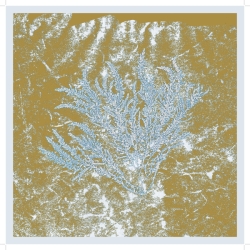 Huerco S.’ last record, Colonial Patterns, came out when I was a junior in college, a time of great personal growth. But that still didn’t mean I wouldn’t listen to certain music in class that made me feel superior to all the other basic communication majors surrounding me. Colonial was an album like that. It’s a record of obtuse, square-peg-in-round-hole dubby techno, with a fair amount of ambient tape hiss distorting and bending notes, as if an iPhone recorded a radio being constantly transported through a time machine. For Those Of You… is along the same lines, but instead of observing the radio in the portal, you’re now inside the portal, observing life in a vacuum. Time no longer has meaning. Melodies and themes are slower, yet more immediate. Sound exists as train capsules to take you along the frozen landscape, shifting as you see fit. In this case, Huerco S. has created a record that’s made for listening in the presence of others and editing your mind’s process of how things are perceived. Or you could just listen to this dope ambient loop record and feel cool as hell. It’s your choice. I just want to feel cool.

I haven’t been too much of a fan of Jerry Paper’s bizarro jazz parlor schtick from his previous albums. I got the point, it just didn’t resonate with me. The vision was not complete. But on Toon Time Raw!, thanks to the rather-anonymous jazz group Easy Feelings Unlimited, Jerry Paper’s den of smarmy oddities has finally reached its peak. With a team of legitimately skilled musicians backing him, Paper has created a colorful and freeing world, ripe with romantic saxophone, nightcap keys & an overall air of goofy luxuriousness. That feeling of sitting in a really big, plush chair in a dimly lit room, watching some sort of extravagant spectacle go down. Who deserves this? You do, friend.

Kino Kimino – Bait Is For Sissies – My Favourite Chords 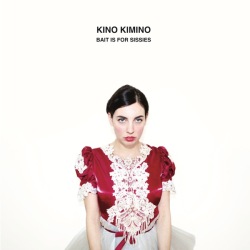 I wrote about this record a bunch in my Overlooked Record List, so I’m gonna do the old copy paste thing, since I haven’t thought of anything new to say and I’m just one guy: For those thinking that good old-fashioned guitar music has truly gone out the window, please escort yourself out that same window you think it’s gone out of. Bait Is For Sissies is the best rock record that no one is talking about this year. Led by Kim Talon and backed up by Sonic Youth members Lee Ranaldo & Steve Shelley, Bait succeeds by avoiding potholes that other rock bands are so prone to falling into during this decade. Nowhere is the facade of lo-fi, lackadaisical songwriting, and the feeling of sweaty try-hardness from the other side of the coin is absent as well. It’s a naturally flowing and honest record that works well by not doing too much, but letting the natural skill and intelligence of the performers do that talking. 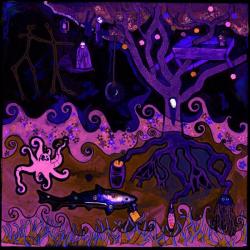 I’ve seen this record heralded as “the best debut record since R.E.M.’s Murmur.” I wouldn’t go that far, but it’s pretty dang good and very promising for a really good follow-up. Let’s Eat Grandma’s immediate comparison would be to art pop witches Cocorosie, but Grandma carries a quality of mysticism that pushes past simple comparisons. There’s a myriad of different musical styles and instruments on here, some that work well, like the mysterious pan flute on “Chocolate Sludge Cake” or glockenspiel on “Welcome To The Treehouse.” Most of the singing really hits as well, especially in the more dire moments of the record like on “Rapunzel.”  However, some moments really don’t click with me, like the overwhelmingly amateurish playing of mandolin and cello on “Chimpanzees In Canopies” and the unexpected rap verse on “Eat Shiitake Mushrooms.”  But these flaws are why this record is so promising. Let’s Eat Grandma are teeming with ideas, most of which are really engaging. I’m excited to see how the attention garnered from this record steers the band for their next album.

Ah, the apparently extremely divisive Mitski. Old people’s bane! All these young people on Twitter and Tumblr are going crazy for her! What gives? The 90s are over! The scene is dead! Well, here’s my “one guy’s thinking and writing synopsis on why myself and many other folks are all Mitski’s new groupies, or in short, the meteoric rise of Mitski.” I can say that she has a gift at making painful love songs, ones that make you long for something or someone. Lots of the melodies carry a melancholy feeling, even the more upbeat ones. The songs build on insecurities mostly held by youth, I think: unrequited love, a sense of fleeting, confusing passion, wasted potential, the weight of the unknown, all that good stuff. Overall, a lot of emotions are present. Her previous record, Bury Me At Makeout Creek, hit me in all sorts of ways and has become one of my all-time favorites. This one finds Mitski on a new label & transitioning into a St. Vincent type character, one that writes songs for weird kids to connect to in weird ways. That concludes my rambling account of this record. It’s a good album. Buy into a bit of the hype.

This one’s a complete no-brainer. I mean, come on. If you haven’t heard this record, please listen to it. It might not be your thing, which is fine, but it’s definitely my thing. Just a bunch of midwestern boys coming together and making a slow-burning, campfire-stoking, beer sippin’ rock record that your dad could potentially enjoy. Nothing flashy about it. Just a good time. It’s great on the road, on the beach, in the yard, in the woods, everywhere. It’s something that will ease headaches caused from pain this year. It’ll encourage folks to call up old friends. It’ll get people out to the beach or to the bar or to the park. So yeah, this record is definitely my thing.

Very thankful for instrumental guitar music. 2015 was the year that really got me into it, with masters like John Fahey coming into view and modern wizards like Daniel Bachmann releasing killer albums. William Tyler is certainly included in the modern wizards category after work in bands Lambchop and Silver Jews and two great solo records. This new one continues the trend of fantastic solo guitar music, but adds onto the formula with some interesting added instrumentation, like bells in “Gone Clear” and subtle synth on “Highway Anxiety.” It succeeds in being engaging, relaxing and a highlight reel of some extremely talented guitar playing.

The classic g-funk sound is back in action with YG’s fun and ferocious Still Brazy. I think that’s something I should say to intro this album. I’m not super well versed in west coast rap, but this definitely feels like part of a larger movement. Aside from being a part of something and calling back a retro sound, it’s a really entertaining rap album on multiple levels. Streetwise bars revolving around gang culture in Los Angeles create bleak environments for super smooth beats made for bouncing car speakers out the window. It’s consistently a good time, despite dealing with some pretty serious subject matter. Also, fuck Donald Trump.