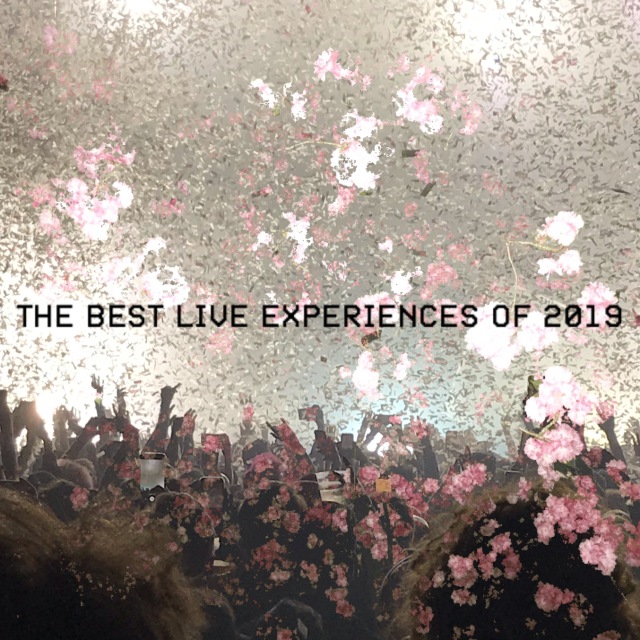 I saw a lot of shows this year. The most out of any year period. There were multiple weeks where I went to a concert every night. Was it healthy? Maybe. I probably didn’t eat very well those weeks. I definitely stopped going to the gym once my schedule got loaded up with shows every night. That’s my fault. But was it fun? Oh hell yeah. I had a ton of fun this year going to shows. SO many artists seen for the first time (128 in fact) thanks to the advent of SXSW and Merge 30. NYC is a beautiful place and allows me to see this many shows. I should really start doing show coverage, but I’m lazy it turns out. Check out what my top 10 favorite shows I saw this year were below, along with seeing all the artists I saw throughout 2019 + stats.

If you know me personally at all or follow me on Instagram, you know this was gonna be my favorite show of the year, no question. There are many factors going into this placement, first of which is that I love Joanna Newsom. That’s an easy one to check off first. Second, I went with my partner, who also loves Joanna Newsom. We bought these tickets before she knew if she was going to get into medical school and move to NYC or not. Not that much of a gamble since she’d come in on Metro North if not, but still. It’d have more weight. Third, is that we both saw her on her last US tour, albeit in different locations. Mine in NYC and hers in Paris. This show had a lot of emotions pre-wired in.

Getting to the music part: hoo-wee. Joanna is still on point even after a long performing hiatus, switching between piano and harp (sometimes mid-song!!) with ease. Her voice sounds great and at one point she took questions from the audience. News flash: having a kid means pretty much everything you do after that point has to do with said kid. I don’t know why people kept asking certain questions even though it was gonna be clear, based on her previous answers, that she’s been super busy taking care of her child. Come on y’all! But back to Joanna’s music. Man I teared up or cried at least 5 times, with “Baby Birch” and “Sprout and the Bean” being the heaviest hitters. She’s a real queen for this one.

I’m in a HUGE Kelly Moran zone right now so I’m likely biased, but then again it was an Ambient Church show with amazing visuals backing up a rising virtuosic talent, so it was probably naturally awesome anyways. Moran plays prepared piano, a version of piano that utilizes placing objects on the strings of the piano like screws that affect the sound of the keys. If you haven’t listened to her 2018 album Ultraviolet, I cannot recommend it enough. She played that album all the way through and had according visuals backing up the music being projected across the church walls. It was absolutely gorgeous and a shock to the senses. I definitely got emotional with this sensory overload. I’m so happy this was my first time seeing her perform as well – what a special evening.

Holy smokes – Charli can perform with the best of them. High energy throughout the set, playing the hits and a few deep cuts. She even played her unreleased song “Taxi” over the speakers before she went on. She made a Terminal 5 show bearable. She made dealing with faded stans bearable. That is something not a lot of places can accomplish. Shout out to Charli. Also the bass in “I Got It” was perhaps some of the most shaking I’ve ever felt in a live concert.

Mr Twin Sister always puts on a good show. This is a known fact! Their show with Ava Luna at Warsaw was no exception. What was best about this show I think is that the past few times I’d seen MTS they played almost all new songs, before their 2018 album Salt was out. Now that I had time to marinate with these new songs and more time for the band to integrate them into their set – man it’s OVER. Brilliant, groovy and so much fun. If you haven’t seen MTS or Ava Luna yet, do yourself a favor and GO.

I bought these tickets in… February? March? And the concert was in September. I was waiting for this and guess what? It was worth it. Stereolab played the hits and I was happy. The band was tight, Laetitia sounded great and had a good sense of humor about the ruckus the crowd was making after every song. I was surrounded by dad-lookin dudes and stood in a merch line for 30 minutes just to find out the one thing I wanted was sold out. And it was all still worth it.

I’m gonna be honest and say I’m not a José scholar by any means, but the chance to see him perform at the legendary Apollo Theater in Harlem was too good to pass up. I’m so thankful that I ended up going, because this was a show I’ll never forget. He was joined by a string ensemble, making his already lush folk songs even better. I think the highlight for me though was when he covered Massive Attack’s “Teardrop”. That was so sick.

Little Simz is a star!! She comes out with “Boss” singing through a megaphone. She cycled through the whole new album with ease and even hopped on bass for a minute. She hopped in the crowd for 101 FM and started rapping to folks. The whole venue was on fire and applauded like crazy after every song. Everyone was on the same wavelength and it was beautiful. If you take anything away from reading my blog in Best of 2019 season, it is to listen to Little Simz. Come on now!

Didn’t think that this show would be as good as it was, but holy hell Sacred Paws are such a good live band. This shouldn’t be surprised, since singer/guitarist Rachel Aggs is such an electric personality on-stage. She was jumping around, doing little dances and was generally a lovely person in and in-between songs. The band was all smiles and it felt like the whole audience (full of people that looked like their favorite band was Belle and Sebastian) was dancing along. I saw them again at Merge 30 and guess what – still amazing.

The legendary Haruomi Hosono (of Yellow Magic Orchestra + Japanese songwriter & producer fame) performed a few dates in the States this year and I was lucky enough to snag a ticket to his first show. He played “American-ized” versions of his revolutionary work with effectively a blues/country band. Hearing “SPORTS MEN” as a country rock song was lovely. And to make it even better, he brought out city pop / Jpop legend Akiko Yano for the first song of the encore. Feeling VERY lucky, again.

Mount Eerie and Julie Doiron played all of their new album Lost Wisdom Pt. 2 and a few songs off their first collaborative album Lost Wisdom. Never thought I’d hear those songs performed in my life. “Lost Wisdom”, “Voice In Headphones”, “What?” and more. They even covered “I Will Always Love You” which resulted in some laughs and lots of applause from the audience.

This was Friendly Fires’ first NYC show in eight years I believe and it was clear their fans needed a release. Everyone was dancing and singing along to all the hits. The new songs fit into the set seamlessly. Singer Ed MacFarlane dances like everyone’s watching and lost his voice near the end of the set. The band really put it all out there. What a blissful, fun, healing night.

Chances are high that a Waxahatchee solo set with additional accompaniment from harpist Mary Lattimore will yield widespread tears. This was definitely the case here tonight. Her voice was pristine and hearing some classic songs (mostly off her last two albums) solo was beautiful.

U.S. Girl will forever and always be one of my favorite bands, especially in a live setting. Put them in the smallest venue I’ve ever seen them in? Now we’re talking. Put a band that’s essentially the U.S. Girls backing band in as the opener and have that band put out one of my favorite records of the year? Maaaaann now you’re out of bounds! This was a wicked show that saw lead singer Meg Remy get into the audience and try and dance with people, but man it was LATE on a Sunday, so people were tired. But still, this band is still a must-see when they come to town.

Last show of the year, last show of the decade!! So happy to have seen Daughters on what’s likely their final tour around their 2018 album You Won’t Get What You Want. They were ripping hot, torching the stage and leaving the rapt audience in disbelief. They also played “Guest House”, of course, which continues to be one of the best songs of the decade.

After a ton of hype from their SXSW performances (one of which I saw, albeit outdoors) they proved that they were the real deal at Alphaville their first(?) NYC performance. They blew the roof off and showed that they were going to be one of the best live bands. I didn’t even know most of these songs but my head was in the game. Also I have to mention the drummer, because you can’t not mention the drummer when talking Black Midi.