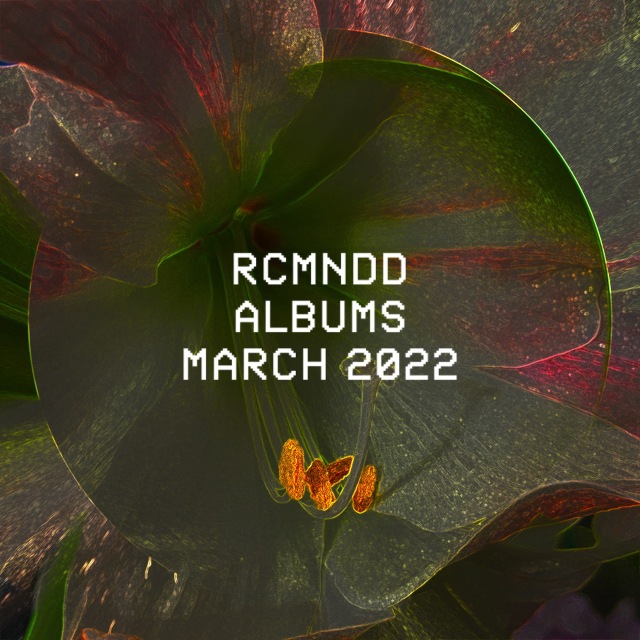 It took some time, but I finally got through my to-listen-to list of records from March 2022 I wanted to check out before pressing submit on another installment of Recommended Albums. Of course, the unending predicament is that there are SO many albums that get added to the list as I get through it, so through a sheer numbers perspective, it’s like I’m making no progress. But these albums are not just boxes to check, they’re artistic statements. Clearly I enjoyed a great deal of music from March, as you’ll see below in my tracks section (which is very long).

To comment on the state of music in 2022 thus far though – I’d say that there is one album from March that I truly love, and another that is growing on me alarmingly quickly. The other eight are fantastic LPs that I’ve listened to multiple times, but I’m not sure if they’ll take the journey with me to the end of the year. Nevertheless, you should listen to everything here, from confessional folk, to heady French grooves, to exuberantly weird punk, to new records from Warm Visions forever-favorites Aldous Harding and Destroyer. And don’t forget to peep my favorite songs below that and follow my Spotify playlist.

Aldous Harding – Warm Chris [4AD]
Going to a quaint restaurant in the mountains with an elderly clientele but when each of the patrons try and make conversation with you, your words fall out like nonsensical gibberish.

Ashinoa – L’Orée [Fuzz Club]
Sinking in quicksand, into the pit of a lost civilization, and sacrificed to a mighty underground deity.


Denzel Curry – Melt My Eyez See Your Future [Loma Vista]
Sitting atop a decrepit skyscraper in a post-apocalyptic future, much like a zen hermit, and deciphering coded messages from the colored smoke that bellows from the landscape below.


Destroyer – LABYRINTHITIS [Merge]
The feeling you achieve when you’ve finally read every book in existence and take your scooter into town to tell everyone about your achievement.


Fly Anakin – Frank [Lex]
Faded 70s wallpaper in an old living room catch the lights and colors of psychedelic visuals projected through a window by the neighbors next door.


Jeremiah Chiu & Marta Sofia Honer – Recordings From the Åland Islands [International Anthem]
A sunrise reflecting off the thick ice outside a harbor town, casting constellations of fragmented light into the homes of everyday workers and scholars.


Nilüfer Yanya – PAINLESS [ATO]
Each of your fingers are a mini-projector, emitting holographic depictions of your lurking anxieties and motivations.


P.E. – The Leather Lemon [Wharf Cat]
Peace is found in the middle of a chaotic dance floor, sitting cross-legged in a full wetsuit (scuba and all), covered in frog slime.

Listen to these songs + MORE via my Best of 2022 Spotify playlist HERE.