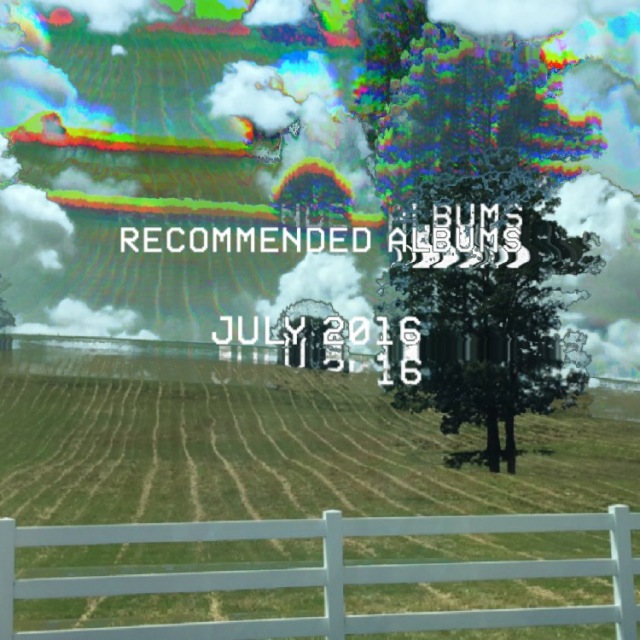 The month of July saw a lot of action, I gotta say. I moved to NYC, my girlfriend came back to the US after a year abroad in Paris, then moved to Washington DC, my parents got really into gin & tonics, among other things. It also saw the release of some of my top favorite albums of the year from artists like Clams Casino, The Avalanches, Cole MGN & Omni. Don’t break the chain, they say. Here’s my favorite albums from July 2016. 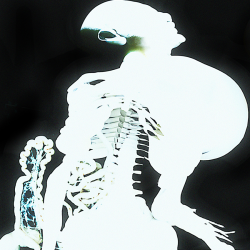 Oh Arca, mi amor. How I am infatuated with you & your alien world. Fresh off the release of his 2015 LP, Mutant, Arca has put out this surprise 25-minute mix, reminiscent of the format of his 2013 breakout smash mix &&&&&, only this time showcases his evolution into something much, much bigger than a run of the mill, weirdo producer that he was billed to be in that year. Entrañas drives home the increasingly obvious fact that he has a voice like no other in music. He is unrivaled. This is some of Arca’s most unrelenting work, focusing in on the ruthless energy of songs like “Mutant” from last year. It’s about finding pleasure in punishment. Pain and glory in wicked, ugly, beautiful sensuality. Almost every track is a disorienting flurry of absolutely crushing beats, stretched beyond recognition vocal cuts and teetering, billowing melodies. If you turn to look away, it’s there, staring at you & ready to play. It’s exhausting to listen to at any time of the day. It’s a full-bodied triumph, standing proud in the darkness waiting to envelop you into its glistening, bloody world. 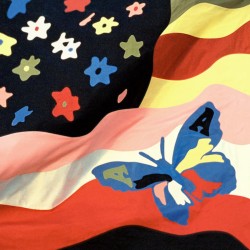 So like the Whitney album last month, this one is the overwhelmingly obvious choice for this month. If you’re unfamiliar, The Avalanches are an Australian electronic outfit that make euphoric, storytelling music through samples and killer grooves. I’m super into them. Not surprising in the slightest. I really love this album, but it also has some things I could really do without. Jonathan Donahue’s kiddie-song like vocals really don’t do it for me and the last three songs are pretty inessential as well, feeling like outliers from the rest of the album. I also wish some of the interludes were longer and more developed since a lot of them leave me wanting more. But where the second half falters (except for huge highlights “Sunshine” and “The Wozard Of Iz”), the first half thrives. Early singles “Frankie Sinatra” and “If I Was A Folkstar” grated on me at release, but I’m in love now. “Subways” is a perfect summertime song. It flows well, sounds great & feels good to be back. 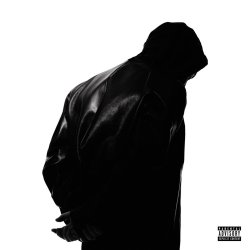 The long-awaited full-length debut from NJ-based producer Clams Casino, champion of rappers like Lil B & A$AP Rocky, is finally here! It’s split into two distinct halves: the first being hip hop & second being more pop-oriented, along with two pure instrumentals. The rap side features highlights like “All Nite” featuring Vince Staples and “Witness” featuring Lil B, two songs that are absolute bangers and make me feel really cool while walking around & listening. The hip hop side feels natural, it’s the Clams Casino backing up the artists we know & love. The pop side seems a little more vanilla for Clams, but songs like “Back To You” feat. Kelly Zutrau from Wet & “A Breath Away” feat. Kelela are easily lovable, as they showcase Clams’ impeccable ability to manipulate vocalists to become part of the background of their own songs. There are parts that leave me wanting something more, but the fact that Clams got Lil B onto a Columbia Records release means I can’t be mad. BASED GOD! 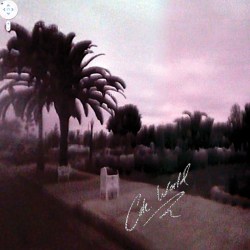 Another superstar producer & engineer extraordinaire, Cole M. Greif-Neill has had hands in many all-star projects in his days. From time in Ariel Pink’s Haunted Graffiti to engineering Beck’s Grammy-winning album Morning Phase, dude has put in work. To my knowledge, MGN hasn’t put out “solo” material since The Samps, a project I hold near and dear, so this EP really hits many sweet spots with me since it follows that past formula pretty closely. It’s an infectiously fucked up, warped & melted collection of bass-heavy electronic pop music. Its influences are more stuck like dripping slime to the skeleton of the record rather than following a distinct blueprint, with chopped & screwed rap fragments skulking in the muck of the first two tracks & bass that sounds like it could easily rattle your car into the next dimension. Nite Jewel is featured on “If U Let Me,” a delirious pop hit that I’m in love with & could easily fit into all your vines of 80s anime babes in cars. This shit is fire. This shit is vital. Get into it and let your brain get consumed. 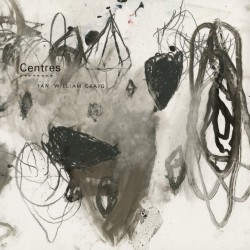 Billed (by myself) as a male Julianna Barwick, Ian William Craig uses his voice in magical ways. He takes it and stretches it out, crumples it up, loops it around the planets and back, layers it, builds structures and topples them, calls for help, affirms himself, worships and destroys. His amorphous voice has the task of navigating an environment that is equally in flux; a decaying world of tape hiss, distorted sequences & skeletons of melodies now passed. It’s a gorgeous, slow, patience-testing album, reminding me at different parts of William Basinski’s tape distortion magic, Grouper’s melancholic world building, Owen Pallett’s melodramaticism and Tim Hecker’s urgency in dissonance. It’s a rewarding listen, especially for those looking for a cathedral of an ambient album. One with lore, an entire library to get lost in. An abandoned temple full of ancient texts. A portal of shifting dimensions. As close to a religious experience for a non-religious person as it can get. Always destroying and creating, a cyclical process. A message to above. 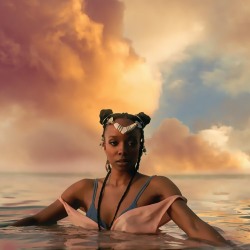 Time and time again, we’ve found that Chicago is currently the city to be in to make some dynamic, fun and important music to push for social change. Kickstarted by artists like Chance The Rapper, a certain feeling of positivity has been overwhelmingly emanating from the midwestern city. Usually making the news for violence that politicians and news outlets like to exploit, this legion of musicians are hoping to put Chicago back on the map as one of the havens of forward thinkers and agents of social change through their art. We see this ideal continued on Jamila Woods’ new album HEAVN. The album features many other notable & incredibly talented Chicago musicians on the record, like Chance, Donnie Trumpet, Saba, Kweku Collins & Noname, to name a few. Truly a family affair. Like other albums from these folks, the songs play out like schoolyard games: instrumentals are playful, Woods’ vocals are smooth and carefree, but the message is as heavy & powerful as ever. Dissecting personal experiences and observations with a motivating force of racial tension in the United States isn’t something one would picture going with something so carefree, but the way they’re discussed here hits a sweet spot. It’s lovely & soulful and carries itself with grace, much like the amazing photograph of the peaceful protestor being swarmed by police from earlier this year. 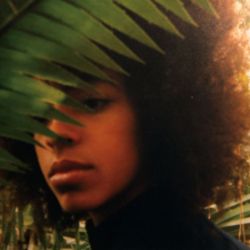 Armed with a cello, some effects pedals & her powerful voice, Kelsey Lu has made a strong statement for herself to be a songwriter to watch in the next few years. Lu’s music is slow, soulful and purposeful. Switching from pizzicato to bowed, her cello playing has the power to exist as a minimalistic backdrop, a driving force paired with her voice, or an added voice to the mix, offering an otherworldly quality that enhances her already unreal voice. It’s a tight, engaging & satisfying EP that should please many since it dips into so many different musical soft spots. 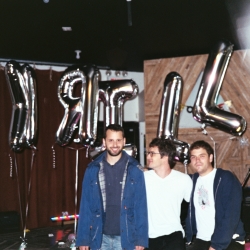 To further the argument that Krill are one of the best bands, they gifted us this little EP of material they had been working on before their unfortunate breakup last year. It’s a small thing, just five modest songs, but to hear the band together again is worth more than anything in the world. I’m obviously super biased to put this above other things, but the songs speak for themselves, too. They’re as weird lyricists and songwriters as ever, bringing up feelings of classic 90s alt rock phases like Modest Mouse &  Built To Spill. Let’s just take this time to be thankful for the little bit of new Krill left in this world and revisit their wonderful old records together. 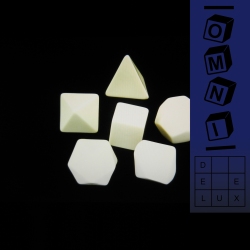 Are you ready for this hotness? This jangly, wiry, post-punky goodness? I honestly doubt it. This record took me by storm for the last two weeks of July, consuming my listening habits and making me a big, jangling fool, shaking my head from side to side to each janky guitar line. This type of post-punk was missing from my life for so long, the pool being polluted by Protomartyr & Parquet Courts clones who can’t write a decent pop hook in a rock song. Omni bring it all here: punchy, straight to the point hooks like Pylon & Devo, rogue freak outs & sour notes like Women and an air of effortless cool like Beach Fossils or Deerhunter. The album has a warm layer of lo-fi fuzz, which normally would make a record forgettable over time due to the homogenous sound, but each song has a lovely quirk or two about them that sets it apart from the others, be it a really catchy chorus, a freaky guitar riff, or a memorable, silly lyric. I adore this album, it’s been the perfect soundtrack to this outrageous, sweltering summer.

UK superduo 2814 made the absolute best late night train album ever with Birth Of A New Day, a record that breathed new life into the ouroboros-like genre of vaporwave, despite it not even being close to the internet genre. However, it existed in the same bubble as popular vaporwave artists, which led frothing vapor fans to gobble this release up and spread its gospel like wildfire. It found me at the right time, commuting back and forth from CT to NYC two days a week. It was a sleepy journey through darkness with only streetlights illuminating the way home. The moody, nostalgic aesthetic fit perfectly with the quickly passing lights, sometimes almost acting as an elevated form of elevator muzak, providing a pleasant backdrop to immerse oneself in while loading the next location. A dose of aural hypnosis to let the time melt away.

Rain Temple finds the group trying to find an answer to this huge and probably unexpected hype from the previous record. The result is a messy mass of dreamy, atmospheric tracks that occasionally reach the highs of Birth, but ultimately lives in its shadow most of the time. Rain Temple succeeds when it doesn’t try and do too much, like on the first track, where it tries to build ambiance and mood, but ends up being the sonic equivalent of slowly coming to a halt, inertia being thrown off balance, and no payoff. When the album just lets a solid groove work its magic, like on “Eyes Of The Temple,” or boldly establishes a sound with a release, like “Inside The Sphere,” then it works. And when it works, oh man does it work. I don’t think this will work as well for late night train rides, but it will definitely add a whole new layer of excitement to night time exploration of my new home of New York City.