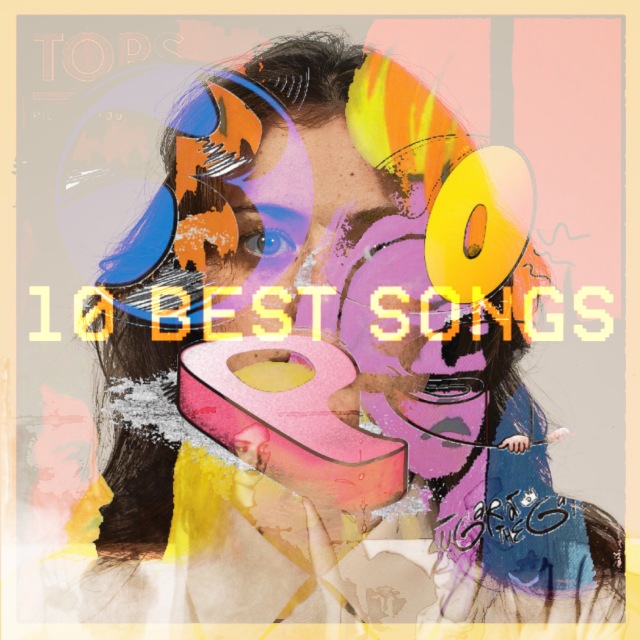 TOPS, currently comprised of Jane Penny, David Carriere, Riley Fleck and Marta Cikojevic, hail from Montreal and have released four albums thus far in their careers. Each album has seen the band hone their blend of danceable, punchy pop music, usually drenched in a melodramatic 80s / 90s cinematic flair. The perfect songs to soundtrack fictional, romantic moments in your life. They’ve been one of my favorite bands since their debut in 2012, where songs like “Turn Your Love Around” and “Diamond Look” were introduced to me via Gorilla Vs Bear and would in turn be on my radio shows nearly every week.

Their sophomore 2014 record Picture You Staring was a landmark college album for me, providing a pure, unfiltered fun soundtrack to put on while having friends over or just to have a good time on my own. The amount of times I listened to “Way To Be Loved” with my friends or with my partner, just dancing around in our kitchen or living room, is too high to count. 2017 came Sugar At The Gate, a effervescent increase in fidelity with no dropoff in song quality and to me also pointed towards a huge leap in the band’s trajectory on the horizon. 2020 then yielded my favorite album of theirs (at the moment), I Feel Alive, full of the band’s most rocket-powered tunes to date, with every element the band did well on previous records coming together in some sort of freaky pop masterpiece.

I’ve seen the band live five times at this point, one of which being when I booked them to perform at my college in 2015. They’re all sweet people, put on great performances and make consistently fun music. It was hard, but I decided to rank my Top 10 favorite TOPS songs to help the uninitiated dip their toes into this spring of buoyant, carbonated guitar pop tunes. You will not regret it.

I mean, this is THE TOPS song in my mind. If someone were to ask where they should start in TOPS discography, I would say “Way To Be Loved”. It kicks off with one of the best guitar hooks of all time. The verses are solid, with Jane Penny singing about love in a potentially toxic form with a friend, which in turn could easily be the listener. “Is that the way I want to be loved?” is something I’ve definitely asked myself while listening. The chorus is so fun to sing along to (and with backing vocals coming in, it basically encourages it) and it cuts back into the infectious guitar riffs. It’s a massive tune. I remember the first time I heard it after being decently into their 2012 debut I knew this would launch them to a new level of fame, or whatever you want to call it. This is always the last song they play live as well and it WORKS. The band extends the guitar riff into a big jam at the end of the song after an ending fake-out and Carriere just goes nuts with riffing, noodling, whatever. The band always seems really into it by that point and it fires the crowd all the way up. What a way to send your audience home happy. The band plays to their strengths incredibly well, and this song is the perfect encapsulation of that.

How I so desperately want to see this song performed live. I Feel Alive easily became my favorite TOPS album only a few listens in. It’s got the hits. It’s got the drama. TOPS sound like they’re firing on all cylinders in terms of atmosphere, songwriting and performances. Nowhere on the album is that clearer than on “Colder & Closer”, which put together ticking-clock instrumentation, cloudy dramatic synths, a steady uptempo beat and Jane Penny’s most confrontative vocal performance yet. She is staring right at the camera on this one, taking the listener to task amongst this gauntlet of spicy instrumentals. It’s just so perfectly arranged – keeping the listener strung along like an intense chase sequence across a neon-lit cityscape. I think of “Topless” on their previous album Sugar At The Gate, while listening. At the time, it felt like an outlier in their discography. Something with a deeper instrumental backdrop and it felt like there were real stakes within the crunchy synths and Chromatics-like staccato instrumentals. Previously TOPS songs centered on the lighthearted and romantic. “Colder & Closer” amped up the intensity beautifully.

Right off the bat, the start of this song is guaranteed to be one of the coldest openings you’ve ever heard. A snake-like bass line, minimal keys and slinky guitar. What a combo. Jane Penny comes in with a smoky delivery, fitting the tender mood the instrumental has set in the intro. Going into this track, you know it’s almost seven minutes long. Are they gonna keep this slow jam thing going for the whole length? Those thoughts are erased suddenly when the guitar gets louder during the chorus and Penny’s vocals get more urgent, trying to break free from the muted softness the song had built upon up until that point. It eventually tones back down to the original softness, although there’s more air underneath the instrumentals, with things getting a bit more funky and free-wheeling. Things are starting to open up. There’s another chorus/loud break, and from there the song just devolves into an extended guitar solo. No flashy shredding, just melodic noodling that suits the song perfectly. A magnificent ending and an absolute live highlight.

After two relatively lo-fi releases from the band, it was cool to see a deeper palette on Sugar At The Gate. Swirly, almost shoegaze-level jangle guitars smoke out the track, bringing a whole new timbre for Penny’s voice to occupy. Like the guitars, her voice is altered slightly, almost like it’s coming out of a phone. It’s disorienting but upbeat, like you’re on a mixture of uppers in Florida, but you don’t really know where or why. Surfing, drinking, chilling, but at what cost?

I know comparison is not fair, but I’d like to call this the band’s first “Way To Be Loved”. It was the first TOPS song I heard and just by the sheer strength of the chorus I knew the band would be making some HITS in the next few years. Vocals do their thing, but the mix-forward guitar offering a great rhythm and beat to the track was the real hook. I would play this on every radio show I could back in 2012 – I was hooked on TOPS and knew they’d be a thing with my friend group. And I mean – the classic treat that the band regularly gifts us is the change-up of intensity at the end of the song. The tempo rises, Penny’s voice takes on a shrill intensity, everything just takes on spikes. Again – TOPS know how to make their audience happy. It’s plain and simple!

I’m very much a full album listener. Whenever I listen to something for the first time, I try and consume the complete product to the best of my ability, not really paying attention to song titles. I even try to avoid listening to early singles. My first two listens of I Feel Alive were positive, but nothing was sticking out. A few days later I decided to just hit play on “Pirouette” to see what the deal was and immediately realized I’d had the song stuck in my head since I listened last. I don’t know what to say – the vocal melody is too catchy and memorable. The slinky guitar backing up the vocals is classic TOPS. Just getting really into this song lead me to listen to each song on the record individually and realizing that every song is fantastic. Thank you “Pirouette”.

I don’t really know what to say about this one. I know, not the best enticement for you to listen to the song. It’s got so many things that TOPS do so well. It’s got a hooky melody, a great high-energy chorus, high-impact instrumentals and it’s just a lot of fun. When TOPS are making music for you to sing along to and air-keyboard with your friends to, that’s when they make the big bucks.

This is the slow-dance prom song of the evening, with the two main love interests locking eyes from across the room and gradually coming to sway together on a foggy dance floor. Taking cues from all the right sources of doo-wop from the 50s and 60s and romantic ballads from the 70s and 80s, “Outside” is a tender ode to the slow dance, with imagery of a street light casting a spotlight down on our main characters.

You ever want to hear a great chorus? Just tune into a TOPS song. It’s pure summer windows-down blasting music, which is something I did plenty of times last summer when I had access to a car. “Direct Sunlight”, I Feel Alive‘s opener, is a great song, but this song really set the mood and established that TOPS’ production and sound design are completely leveled up since their last record. You’re in for a whole new band – same great songwriting and performance, just maximized in every way.

When the guitar gets real punchy at the end of the song? What a moment. Solid uptempo dancey song with a keyboard solo and more stellar guitar work from Carriere. I already used this adjective at the start, but this song is perfectly punchy. It gets you hyped up, the chorus slows you down, then the verses pump you back up. It’s lovely.

Frankly I love all these tracks and I could easily sub these in for the last few ranked ones on the list. TOPS are a great band and they make me really happy. I hope you enjoyed reading.