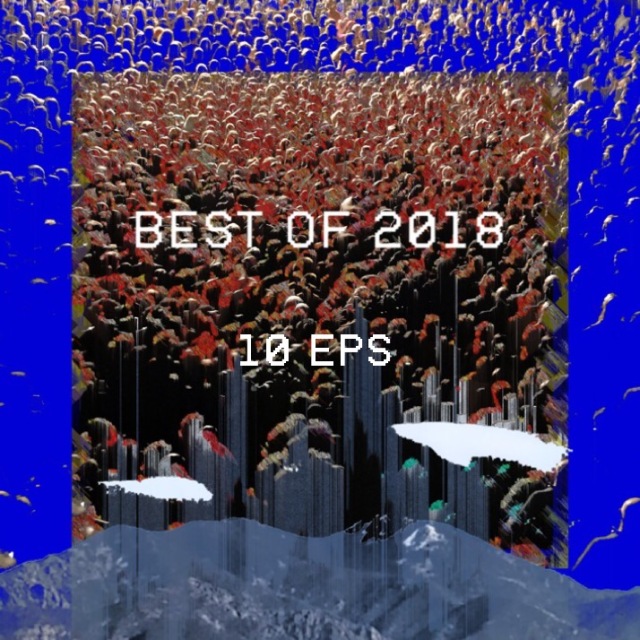 As the tradition goes, WARM VISIONS LIST WEEK gets kicked off with the EPs. The little appetizers to stimulate musical appetite, the accoutrements to dress the heavy-hitting long-players. Although, someone can be plenty satisfied by ordering just apps at a restaurant. This is essentially what’s happening here: we have a bunch of bite-sized packages that pack in flavor like no other, but exist on a separate section of the menu from the entrees. Quite a bit of flavor we have on deck here as well, from bouncing pseudo hip-house, to sugary sweet jangle pop, to experimental R&B, to interplanetary house bangers, to masochistic electronic. Let’s get it!

A bent metal baseball bat with golden bangles hanging from the handle is propped up in the corner of a concrete stairwell.
— — — — —
Fiery collab between warrior poet and exciting experimental producer/DJ, incorporating non-western melodies and instrumentation with deep bass and tough vocal deliveries.

One motivated youth trains flocks of birds to spread the message of rebellion through distinct flight patterns during the changing of the morning guard.
— — — — —
Experimental pop with a super unique voice, showing flashes of absolute brilliance among some inconsistencies. One to watch for 2019.

At the bottom of a whirlpool, beside the tattered remains of lost ships, lays a resting, powerful spirit.
— — — — —
Patient, well-arranged tunes with vocals and instrumentals that pour in a steady stream. Seemingly effortless, subtle grooves.

A virus from outer space that makes everyone dance has floated into our atmosphere!!!
— — — — —
Three interplanetary party bangers, an instant burner for anyone’s DJ set. Insane boogie.

The soundtrack to one’s perspective of an overlapping network of online chat rooms between friends & potential lovers after being grounded on the night of the big dance.
— — — — —
Slick, psychedelic R&B pop songs from a quickly-ascending star, evidence that a traditionally stellar pop voice can succeed over weird, cosmic guitar instrumentals.

Every patch of dirt that you step on with bare feet, a palm tree seed is planted.
— — — — —
Every good trope in indie rock from the past decade distilled into six killer songs.

Driving to the club, down a palm-lined street at night in a very expensive car, but continuing to avoid reaching the club because the playlist you made is too good and you don’t want it to end so soon.
— — — — —
Elastic, Detroit-leaning techno with coolest-customer West Coast emcee delivery. The type of music that makes you feel cool no matter what. Appropriately from the same label that brought us Yaeji.

Going home for Thanksgiving to confront and repair years-old trauma and wafting embarrassment with assorted parties in your small town.
— — — — —
Three of this decade’s most important new songwriters combine their powers for a highly impactful set of tunes, further establishing their long-lasting legacies of emotional intelligence.

Like acquiring the Midas Touch but instead of gold, everything you touch turns to Valentine’s Day heart candies.
— — — — —
Refreshing, overdriven jangle pop thrown into a tornado of reverb. An overdose of pop rock sweetness. Calls upon the immediate respect from the old masters.

Across a foggy, strobe-lit club, a dancer stares at you intimidatingly.
— — — — —
Tough, smoky, intimidating house-touched electronic. A balanced euphoria of abrasive, smooth and mysterious textures. Masochistically addictive; a dark carnal pleasure. Unsurprisingly, they’re friends with SASSY 009, the creators of my fav EP from 2017.