Hey would you look at that – Recommended Albums is back in the saddle babyyy. I gotta be honest, this wasn’t too easy to put together. 2017 has started off with a wimpy sigh in terms of music that should be rocking my world. Maybe my expectations are too high? Maybe I’m so dang depressed with this crazytown world we live in that nothing feels good anymore? Either way, here are 10 albums that spark some pleasure in my brain zone that I hope you’ll enjoy as well. Truly something for everyone in here: folk, hip hop, electronic, rock, ambient, whatever. I got you.

After deeply hooking me in 2012 with her lead work in, per last.fm, “jortscore” bands Swearin’ & P.S. Eliot, Allison Crutchfield has been out on her own making similar music with a bit more of a poppier synth focus, as seen on this release and her 2014 Lean Into It EP. To me, Crutchfield’s songwriting succeeds in areas where Swearin’s succeeded: with short, direct hooks that would make a basement full of jorts-laden punks pump their fists in the air. There are only a few moments like that on here (“Dean’s Room,” “The Marriage”), with most songs opting to go long & pretty. These longer moments show Crutchfield’s growth as a songwriter, especially emphatic “Mile Away” and potential Camera Obscura lift “I Don’t Ever Wanna Leave California.” Overall, I think it’s good, but I’m more excited for how she proceeds next.

What more is there to say about the master? I can’t really think of anything, especially since this is another long-form ambient piece, almost an hour in length. Gotta love the return to the ghostly marimbas. Really good for thinking, for doing whatever to. I mean, cmon, it’s Eno.

My first musical crush of 2017! The year was still new and hadn’t gone to complete bonkers insanity yet, I had just spent a really great weekend with my girlfriend, it was lightly snowing in New York, I had just gotten paid… Things were really aligning in my favor. Walking around at night to these soothing sounds was nothing short of a revelation, especially to the last track, “I Live Now As A Singer.” Such gorgeous music. Just unplug yourself from the deafening madness and let this take control. You’ll be happy you did.

I never thought a Migos album would be a favorite of mine in any capacity, but here we are in wild-ass 2017. I genuinely really enjoy listening to this whenever. It’s giant. It’s a lavish album. I feel outrageous listening to it. It feels like riding in an expensive car through some kind of giant castle. It’s from the renaissance. This album is the musical equivalent of a renaissance painting. There’s even a 2 Chainz guest verse. Forget about it. The ad libs? The beats? The Migos flow? “Slippery?” Forget about it. But you should actually forget about that Lil Uzi Vert verse, that thing’s trash. 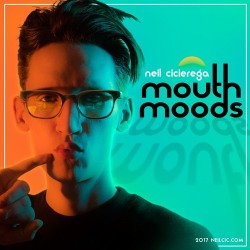 Mouth Moods, the third mashup album from the mad creator of such greats as “The Final Showdown,” “Potter Puppet Pals” & “Brodyquest,” is too good not to include in this list. People need to hear Linkin Park’s “In The End” mixed with Doobie Brothers’ “What A Fool Believes.” “Wonderwall” mixed with “You Spin Me Round (Like A Record).” “Back In Black” with “A Thousand Miles.” “No Scrubs” and “Stairway To Heaven.” But then there’s insane pop culture meltdowns, all executed perfectly. You will start to think these are the original versions of these songs. To people turned off at the thought of wasting time listening to a mashup album, I implore you to listen to this all the way through at least once. You will absolutely lose your mind. I hope you like “One Week.”

This record is what you call an amazing progression in sound. 2014’s “Bodies And Control And Money And Power” was a basic continuation of the hyped up homemade punk that got them their kickstart, but didn’t embellish much on that. This feels like a quantum leap for the band. They retain their raucous sound they inhabited on their previous projects but adds an incredible amount of depth through added instrumentation, use of interludes and pacing, and longer song structures. If you had told me four years ago that there would be a touching string interlude on a Priests record (“Untitled”), or if there’d be some kind of Old West saloon piano holding everything up (“JJ”) or a really sick, slow euphoric hook “Lelia 20,” I would have been like “haha nah, but dang that sounds real cool.” And it’s real cool.

I haven’t listened to this yet. However, I’m very familiar with the formula. Mike & El rap about getting fellatio from your mom in a cool & clever way while referencing politics over a very inventive, hard-hitting beat. That’s how it’s been twice so far, plus double in 2012 with “R.A.P. Music” & “Cancer 4 Cure,” respectively. I understand that there are changes every time. But I really haven’t been in the right mindset to listen to RTJ in 2017. More like staying in bed all day & listening to Grouper. Somehow that hasn’t stopped me from listening to Migos or Future, but oh well. Also it’s highly unlikely that anyone reading my blog hasn’t listened to RTJ yet besides like, my family members, so I don’t even know what the heck I’m even talking about anymore!

Another year, another Ty Segall record. I had his last one, Emotional Mugger, in my recommended albums of January 2016 too. I like that one more, but this still has it’s charms. Much more well-groomed and tame than Mugger, not as immediately striking as 2014’s Manipulator. In the Segall canon, I’d lump it into a group with Sleeper and Goodbye Bread. Brings the heat, but also some slow classic sweetness. Like a cool barbecue sauce. Although the prog breakdown on “Warm Hands (Freedom Returned)” is awesome and nerdy and I love it.

Wake In Fright peeled my fingernails off. It gave me full-body third-degree burns. It gave me a swirly in a rest stop toilet. It put me in a sheet-metal box and threw it down a cliff. It put me in a forest where all the trees were being chopped down simultaneously. It gave me a low-paying office job and bolted my legs to my desk. It powercleaned my entire life’s story out a window. It made me impotent by looking at me in a certain way. It’s gonna kick your ass and you’re gonna like it, because that’s how the world is now.

Another entry into the catalog of admirable rock n roll from some fun-sounding folks. Add into the same field as say, Ian Sweet or Forth Wanderers. Really catchy tunes with a bit of a slacker touch, but not so much to say that the band is lazily playing. I hate when I listen to a record and it sounds like the band doesn’t even care what’s going on. It’s clear that a lot of heart went into this, which is why I like it so much! I’m excited to see where this band goes in the future!