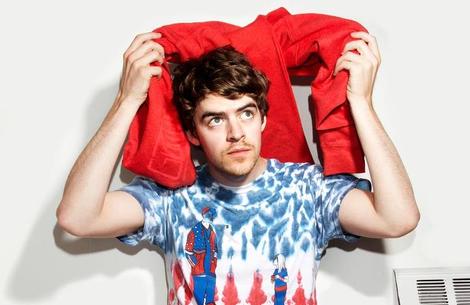 I’m really glad my appreciation for hip hop is growing. If it wasn’t progressing like the way it is, I would have missed great albums this past year to now from Killer Mike, Death Grips, El-P, Lushlife, Danny Brown, A$AP Rocky and insanely good mixes from Ryan Hemsworth.

Ryan Hemsworth of Halifax, Nova Scotia, is a beat maker and electronic music producer that seriously knows what he’s doing. I found out about him probably like a lot of other people found him, which was through his “Slowed Summer” mix for Scion, which was featured on Gorilla vs. Bear, one of my most frequented music sites. I was about to pass it up, looking like another hip-hop mix, until I saw the words “Donkey Kong Country.”

You may not know this, but Donkey Kong Country games basically define my childhood. They were THE games of my youth. I started playing at age three, and I’m still playing DK titles now. I’d play for hours on end, becoming furious when a challenge would uproot my whole six year old life, only to come back a few minutes later to try again. The soundtracks to the games have been imprinted into my subconscious, so whenever I hear them I am transported back to my childhood, sitting on my family room floor, clutching a Super Nintendo controller. It helps that the soundtracks are usually pretty great, I regularly listen to some of the tracks off of the second DKC installment. Looking back, they almost seem made for rappers to go off of them or to be remixed by beat wizards like Hemsworth.

So, now you can see my immediate fascination when I saw the game title on the sample credits. First thing that you hear when you start the mix is part of the theme in the Forest Temple from Legend of Zelda: Ocarina of Time, another crucial part of my video-gaming youth. Then filters in the blissful tune of “Aquatic Ambiance” which was featured in the water levels of Donkey Kong Country. It isn’t just the original song that was used, Hemsworth turned it into a dope beat with snares, bass, the whole thing, while keeping it still really mellow and deep, like in the game.

Now you might be wondering why I started this post with a little blurb about hip hop since I’ve spent all this time talking about video games. Well, after the DKC sample, it goes into one of Kendrick Lamar’s newer songs, “Swimming Pools (Drank)” where Hemsworth has put his own spin over the beat on the song. I haven’t really been a fan of Lamar’s stuff, but I really like this song. If it weren’t for this mix, I would have missed one of the best Kendrick Lamar songs! Other rappers are featured, but Lamar’s is definitely my favorite one that’s on here.

The rest of the mix features TNGHT, Juicy J, Rick Ross, Gunplay, a “Castlevania: Symphony of the Night” sample and at the end a great use of a Donkey Kong Country sample. He pairs the booming voice of Rick Ross with the “K. Rool Returns” theme, which is to be paired with Donkey Kong Country’s main villain, King K. Rool: a giant, pot-bellied reptile that exudes wealth and power- perfectly paired with Ross. Maybe not the reptile part, but the huge, booming sample is the best bookend to the mix to foil the smooth, silky sample at the beginning. It ends with the spooky sound from the Forest Temple, just like where it began.

Here’s this mix, let’s get on to his others:

Alright, so after listening to the revelation that is this mix a few times over, I decided to check out the rest of his material and boy was I delighted to find even MORE Donkey Kong Country samples. But not only that: these mixes are so goddamn good. The way each song filters into one another is flawless. I’m just talking about his mixes right now, I’ll get to his songs later. He has a lot of material, I found.

Let’s take my other favorite of his, the LFTF (Live For the Funk) Mix which starts off with a Playstation start up noise and then goes into the title theme from Ocarina of Time. That is just a dream come true for a video game/music nerd like myself. The rest of the mix features rappers like Main Attraktionz, Danny Brown, Rick Ross, Action Bronson, Drake, ScHoolboy Q, A$AP Rocky, Kanye West and MANY MANY MORE. The mix is about 75 minutes long, no stops: there’s a lot of content. Other great things that are included in there are bountiful Donkey Kong Country samples, some snippets of Clams Casino’s best work, AraabMuzik, Grimes, Jessie Ware, Bjork, Daft Punk, Mariah Carey and again, MANY MORE great things. It’s like a treasure hunt, trying to find more and more songs that are bunched together or used as a beat.

In his mix for Forty Ounce Clothing called “Sake on a Suzuki” he uses mostly Japanese producers work as the beats and they’re great as usual. But what I want to highlight most about this specific mix is that he samples the game Katamari Damacy, one of the strangest but best games for the PS2. He pairs this silly sample with WU-TANG CLAN. WHAT?? This guy really knows his stuff, his appreciation for a ton of different artists is fantastic.

But just you wait folks, he does great remixes too, if you hadn’t guessed! The first I’d like to rave about is his remix of Grimes’ great song “Genesis” where  he turns the song into an ambient, smooth track to easily rap on by adding a new drum track and using the vocals more as an ethereal instrument rather than a melodic device. It’s light, flowing but it can go hard at the same time. He used the song in his LFTF mix, but didn’t have anyone rap over it, which I think is good, for now. The other one I’ll feature is his bootleg of Frank Ocean’s song “Thinkin Bout You” which unlike the Grimes remix, preserves Ocean’s pristine voice, which was the right move. Grimes’ voice is more airy and is easier to evaporate into haze over a track. Ocean’s voice is a more prominent force here, singing over a new drum beat and the bridge features an arpeggiating synth line and big synth washes, giving the song a more electronic feel, which I surely appreciate. The song is fantastic because it makes itself different from the original but it doesn’t totally disrupt the original by making it offensively obtuse.

So yeah, that’s all I have to say about Mr. Hemsworth. His material has been on the front of my listening agenda for about a week now, so all of his material is definitely appreciated. He’s also getting a lot more coverage, like he should. You can check out his Bandcamp page HERE and his Soundcloud page HERE.

Alright folks, have a nice day.