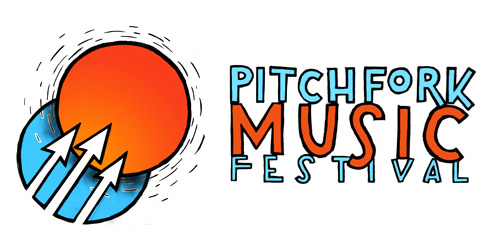 This past weekend a few of my friends and I traveled down to Chicago for the annual Pitchfork Music Festival. We had no idea what to expect, due to never being to a music festival before, so I’m pretty sure we were all excited to see a bunch of our favorite bands play it up.

We arrived just as some dark clouds were forming and sure enough, it rained. Scratch that. It poured. Thankfully, the torrential downpour only lasted about 10-15 minutes and ended about 5 minutes before the first acts broke out their instruments and jammed away. The first two acts that played were Alla, an alternative Spanish trio, and Cave, a throwback psychedelic rock band. Both of the bands, I later found out, were local Chicago bands which is nice of Pitchfork to get some bands out into the open more. But we were unfamiliar with either, so we decided to stake out a good spot before the hoards came.

The earliest act we wanted to see was the lo-fi pop awesomefest Best Coast, who played after Cave. We wormed our way through the crowds until we got a pretty decent distance away from the stage. After a bit, Best Coast came on and slathered the audience with their dreamy pop hits. It wasn’t the same as the recordings because Bethany’s voice wasn’t delayed with the live mic, but the songs sounded just as good and energetic. They played a great set and finished with my personal favorite of theirs, “When I’m With You.” 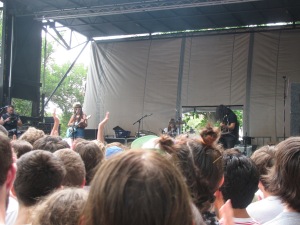 We stayed at the same stage for the next performer, Washed Out, the one-man glo-fi band. I hadn’t heard much of Washed Out before, but one of my friends really liked his material, so I thought that would be enough for me to stay. Before this, though, I got hit in the face by a stray full water bottle that people were throwing out into the audience because of the heat. It also hit a guy that I was standing next to by bouncing off my head and hitting his, but we’ll get to him later. Washed Out started his set and I started to really enjoy his chill beats and synths that he was laying down. Like I said, very chill. 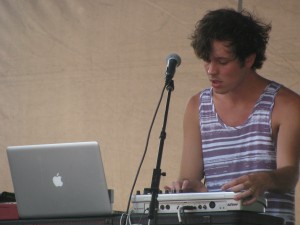 Next up was one of my personal favorites, Beach House. I had already seen them before when they opened for Grizzly Bear back in September, but this time they were performing tracks from their new album, Teen Dream. Which is so far my favorite album of the year so far, so you should go pick that up right away!

We got a pretty good view of Beach House and we could hear them perfectly. Victoria Legrand’s voice is one of a kind, and it melts my heart with her crooning melodies and emotional output. Her hair is also amazing. Their set was probably my favorite at the festival, and we didn’t even see the entirity of it, because we had to rush over to Local Natives, who were pretty much playing the same time as Beach House. This angered me, because those two bands were some of my favorites of this year! What are ya doin’, Pitchfork? 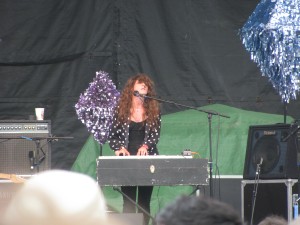 As we reached Local Natives, we all realized that it was unbearably hot and humid out. As the crowd packed in around the stage the more hot and uncomfortable it got. It really impeded our Local Natives watching experience, but they put on a wonderful set with spot-on vocal harmonies and a lot of really good energy, keeping the crowd in good spirits despite the heat. We only caught about four songs, but it was worth it.

After Local Natives we had a well needed break for food, water, and shopping. The festival had a diverse array of food choices and I thoroughly appreciated that. Water was also abundant, which was universally appreciated. The vendors selling band merchandise and other assorted apparel was very nice as well. One stand was selling $1 records! I’m still amazed that I didn’t buy at least 10!

Another thing that was going on at the festival was something called Flatstock, which is a gathering of all the band poster artists selling their works at pretty fair prices. We were in awe of some of the posters and wished we could get them all, but I ended up getting a sick Pitchfork Music Festival poster by The Bird Machine, and one of my friends got a sweet MGMT poster.

While we were doing all this, Lightning Bolt, the experimental noise rock duo was taking the main stage. I didn’t know Lightning Bolt at the time, but now I’m kind of disappointed that I missed them. Their music is PURE energy. I could definitely hear them from across the festival, but again, I’m disappointed I missed seeing them. I bet they are a sight to behold. Also going on was the surf rock group conveniently named Surfer Blood. Which I missed. I was able to hear them under the loud raucous that Lightning Bolt was creating and I was again sad that I missed them.

After all our shopping excursions, my friends went to go see Major Lazer, a duo comprising of DJs Diplo and Switch. Major Lazer isn’t my cup of tea and I expected it to be extremely crowded around the stage. They told me it was a blast, though.

We regrouped after Major Lazer to check out the last of Neon Indian‘s set. I hadn’t listened to Neon Indian much before this, but I really enjoyed his set. Their arsenal of feel-good retro-electro hits like “Deadbeat Summer” got me right back in the mood after not seeing any artist for an hour. 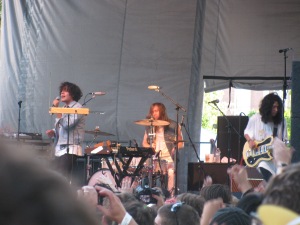 Next up was one of the most anticipated acts of the night, the hardcore noise rock band Sleigh Bells. Thankfully it was at the same stage we were at for Neon Indian so we could actually try and move closer to the stage. Unfortunately, to keep our spot we had to sacrifice seeing Big Boi, the speed-rapping “down to earth” half of Outkast.  When the first signs of Sleigh Bells flickered on the stage, the crowd went nuts. Some of the band’s amps and microphones were experiencing technical difficulties in their soundcheck, so the concert was delayed a bit. But, when the band came on, they exploded on with the fantastic song “Tell ‘Em.” The band played their entire album, only 35 minutes worth of material for their set at the festival and it was one of the craziest, loudest and most fun shows I have ever been to. Definitely one of my favorite performances of the fest.

The festival wound down to the last act of the night: one of the most influential indie bands of the 90’s, Pavement. We headed over to the main stage to see if these old dudes still got it after a haitus in the 00’s. But indeed, they do. Their set was layered with pretty much all the crowd’s favorites, starting out the set with the essential “Cut Your Hair.” Stephen Malkmus’ constantly sarcastic droning voice was just the same as it has always been and they finished off  the festival with style and some nostalgia-filled moments for those “old folks” there. 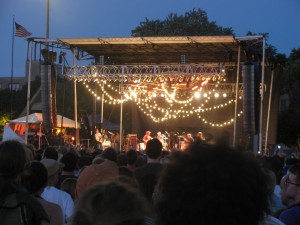 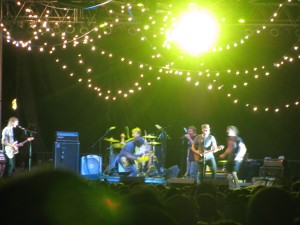 So my first experience at a festival is pretty much what a festival is supposed to be: a place beneath the beating sun where it is impossible to see all of the fantastic bands that attend the fest, but you do get to see some of them while being cramped between the sweaty guy in Ray-Bans and the girl with the endless tattoos. I’m not saying that this is a bad thing, I’m saying that is very unique to what it is. A festival is a festival, 100%. My favorite act was a tie between Beach House and Sleigh Bells; pretty much polar opposites: the chill out melodies crooned out by Beach House and the noise-pop anthems belted out by Sleigh Bells clash together but they say opposites attract, eh? (Goodness, that was cliche!)

All that being said, I had a VERY good time and I would love to go again next year. Hope y’all have a good day!

1 Response to The Pitchfork Experience