Perfect Pussy – I Have Lost All Desire For Feeling 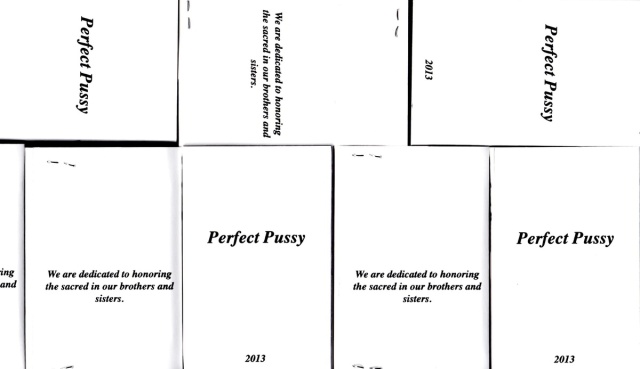 So CMJ 2013 came and went, I had a great time but unfortunately did not get to see as many of the bands hat I wanted to see due to my youth and shows selling out. However, I was introduced to many different bands through my friends seeing bands that they recognized on the official roster. One of these bands is Perfect Pussy, from Syracuse NY.

One of my friends brought up the band one day in the WHUS office, saying that his band were supposed to play a show with Perfect Pussy, but they had to cancel the show due to another obligation. I checked out their EP, and liked what I heard, but didn’t get into it too much.

Later that day, I saw their track “I” was “Best New Track’d” on Pitchfork. Later, I saw that they were being featured at an unofficial CMJ showcase, put on by Pitchfork, along with other great, rising groups and songwriters like Courtney Barnett, Priests, and Joanna Gruesome. Clearly, this show would have been amazing, but the show sold out before I was able to head over there.

Thankfully, Pitchfork was kind enough to record most of the show and compile it into a great doc, showcasing all of the lead ladies from each band and their opinions on females in the blogosphere, the new music scene, and the punk scene. Tons of totally insightful comments on their views and their background, making me think “damn these girls are so cool.”

I decided to check out Perfect Pussy again and was blessed with the harsh distortion and Meredith Graves’ shouting vocals, which I’m super into. After moving to Connecticut, I’ve definitely gotten more into the local punk scene of the tri-state area, which is ripe with tons of talent. Check out Perfect Pussy’s bandcamp below, as well as the Pitchfork Doc.

Have a great day, y’all